In 2018 we fell in love with this unique and magnificent place, a place steeped in history. From then we undertook the transformation of the agricultural hamlet, to share the beauty of this place with fond of history and old stones, lovers of unspoiled nature, and you who are looking for peace and quietude. This place steeped in history whose roots go back to the Middle Ages, this unique Ardèche heritage will seduce you with its authenticity

Fontréal, known as the “Château de Fontréal” is built on an historic site occupied since the 11th century. There have been many transformations over the centuries, the original castle probably dates from the 14th century, and started as a “ Maison Forte” type with a rectangular main building flanked by 2 round towers with flattened roofs at the back and a large round tower at the front. Of these 3 towers, only one original tower remains at the back, the tower in front of the house would have been destroyed at the same time as the castle of Rochemure (Saint Jean Chambre) on the order of Richelieu ( around 1630). The current building dates from the transformation undertaken by one of the owners, Etienne Chabanette, at the beginning of the 19th century, which will also create a garden where the author wished to be buried.

The “fort de Fontréal” was part of the fiefdoms of the counts of Poitiers Valentinois. In 1360, Louis II of Poitiers gave the fiefdom to Dominique de Vinay. In 1375, in the list of possessions of the family of Poitiers in Vivarais, provided to the king of France, Charles V, appears the castle of Fontréal. 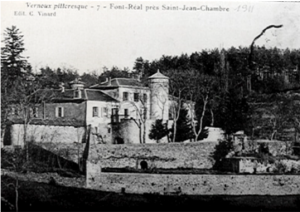 Fontréal follows the fate of the other castles of the barony. Several lords succeeded one another: In 1445, Jean de Bernard, lord of Fontréal, then the noble family of D’Eygu. (Antoine and François d´Eygu were in 1536 on the "rolle" of the backbench). Benoît Bernard, Lord of Fontréal, gave his seigneury to his nephew, noble Claude d´Eygu (also named Daygon) who lived there in 1551.

In 1548, Diane de Poitiers received the title of Baroness of Chalencon, of which Fontréal belonged to. The place according to the legend became one of her hunting appointments. It is unlikely that the Duchess of Valentinois came to Fontréal often.

On July 19, 1709, the King's dragons and the Camisards led by Abraham Mazel clashed, after having been defeated on July 8 at the Col de Leyrisse. The battle of Fontréal marked the end of the war which had bloodied the Cévennes country for seven years.

In 1748, César de Fay Gerlande, lord of Privas bailed out to Pierre Antoine Bouveron, the noble domain of Fontréal, with justice, cattle and lands in Seigneboure (St Jean Chambre), Chazal (ruin of house), lands at Bard (about 800 meters south of Fontréal), called Pré du Bourg. Fontréal is "an old castle" with two towers with other buildings, all in very poor condition.

In 1772, the lease and the pension to be paid passed to Etienne Chabanette, housekeeper in Fayolle (St Jean Chambre), approximately 300 meters south-east of Fontréal. The property which became national property during the revolution will be acquired by his son Etienne, around 1798. He will initiate the visible transformations of the 19th century. The property will remain in the family until 2006. The following owners undertake the renovation of the main body until 2018.